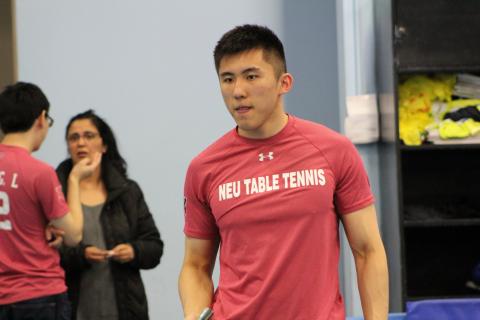 Each month we take a moment to look at one of our NCTTA ALUMS. Check out what recent grad Michael Wang (Northeastern University) is up to!

Contact info@nctta.org to be a part of this next ALUMNI SPOTLIGHT FEATURE!

About Myself and my work
I graduated from Northeastern University last December with my Bachelor's in computer science, and I'm currently working as a security researcher at MIT. I've lived in Massachusetts my whole life and started playing table tennis when I was ten years old. For a few years in high school my only strategy was to hit everything as hard as I could, which in hindsight was not very smart.

What do I enjoy most about my profession?
I like the intellectual challenge of it a lot, and cyber security is a field I care about. I like research in particular because the idea of tackling unsolved problems is very appealing to me.

What else am I up to?
I'm applying to graduate programs right now, so hopefully that goes well... I'm also taking a class alongside my daytime job which keeps me super busy. Outside of career stuff, I'm taking music lessons, which is my main hobby right now. It's a very interesting contrast from working with computers - computers are so literal, but music is super abstract so it's a great challenge and very soothing for the soul. I haven't had much time for table tennis unfortunately, but hopefully within the next year or two I'll have some time for it. After being a competitive table tennis player for so long, it's hard to think of it as just a hobby. If I were to get back into it I would want to dedicate a lot of time to improve.

Words for future athletes?
Don't give up! I almost gave up table tennis for a year in high school because of a few bad tournaments. I really regret it now - I would be much better if I had stuck with it and kept training properly. Technique/strategy wise, don't underestimate the importance of footwork and short game. Practice your serve a lot. Don't get into the habit of prematurely backing away from the table.

Favorite NCTTA memory?
Probably when we won the Northeast regional team tournament in 2018. There was definitely a huge luck factor - one of NYU's top players wasn't available and we definitely would have lost if they were. However, I still played a great match which is why it's one of my favorite memories. Another awesome thing about NCTTA is meeting people from different schools. My other favorite memories generally include hanging out in the hotel rooms with people from other schools at nationals.